BOO! AAAAAAHHHHH! The scream of  an innocent boy flew past me. Mwah hahahaha!

It was October 31st, Halloween night!! My friend and I were planning on scaring people as they came to get candy at our doorstep. I was dressed as a vampire for Halloween, but to scare people I wore my friend’s screamer mask. The plan was to sit on the bench as still as a rock. We had to look like decorations. And just as kids came up next to us… BOO!!!!!!!!

I sat on the bench. My friend would signal to me when a kid was close so I would know. Suddenly, I saw a group of middle-schoolers walking towards us. I thought it was hopeless – how would we scare kids older than us. It was worth a try though.

I sat as still as a statue. As the kids climbed the steps, they saw me on the bench. One girl said “Is that a person or a decoration?” Another kid responded “It’s a decoration!” Hahaha, I thought. They will sure find out what it is. Just as they were about to go past me I got up abruptly and yelled AAAAAARARRRGGGGHHHHH!!!!!

“AAAAAHHHHHHH,” the middle schoolers went falling back in fright. Some girls even ran away without taking the candy. We all laughed like happy goblins!!

I sat down on the bench again. This time we saw a group of high schoolers approaching.   I was having second thoughts about doing it to older kids. Well I did it anyway.

I saw the kids climb the stairs. As they stared at me, I didn’t know what to do. So  I sat still as a rock, hardly breathing.  Just as they moved I went AARRRRRGGGGGHHHHH!!!!!!!!!!!

What!!? Nobody jumped back surprised? One kid pulled off my mask laughing at my failed attempt! Oh well, sad for me! I gave them candy and they left. I wanted to get revenge on them so bad because I heard them talking to some other kids that we were going to try to scare them. Our plan failed that time as well.

It was a fun Halloween! I had more fun scaring people than trick or treating.

BEWARE: If you see someone in a screamer mask next year, who knows? It might be me trying to get you as my next victim. 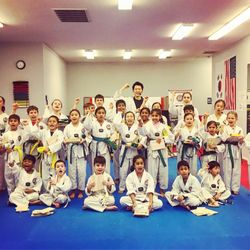 Hellooooo! This is my very own blog! I will be sharing all of my personal experiences on this blog. I will write at least 1 thing every week! Please come and check every week to see new experiences I have written about!